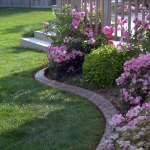 Curbmate has helped establish over 3000 curbing businesses throughout the United States and Canada. Curbmate was founded in 1983 in Salt Lake City, Utah. It's presence, however, is felt throughout the world. The company has been run from it's inception by people familiar not only with engineering and manufacturing, but also with extensive experience in the curbing business. Mr. Larry Rose, President of Curbmate Corporation for the past twenty years, has had Curbmate machines operating in as many as five different markets and two different states at the same time before he took on the responsibilities as President. Curbmate Corporation has been the leader and the driving force behind the popularity of concrete edging throughout the United States.
The patented Curbmate machine comes in both electric and gas models depending upon the usage and need. It has a low center of gravity, a tight turning radius, and is self-propelled. It produces a beautiful, continuous concrete edging for use in commercial and residential landscape settings. The commercial grade extruder produces curbing for driveways, parking lots, golf courses, and other uses as well. Because the machine produces a zero-slump concrete product, there is no longer any need for form work in these applications. 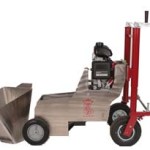 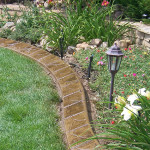 Curbmate has recently relocated to Colorado. The move to Colorado will allow us to expand our operations and to serve you better.With Curbmate's history of 30 years of curbing experience, coupled with the cooperation of it's operators throughout the U.S., there is no lack for training expertise, concrete knowledge or marketing aid. Curbmate is without equal in serving it's customers. Beyond selling three different models of Curbmate machines, Curbmate Corporation is also one of the nation's largest dealers in the ancillary equipment needed by it's operators. Curbmate sells everything from it's machine to entire packages consisting of trailers, mixers, sod cutters, bed edgers, and marketing materials. Again, vast experience brings only the best equipment and expertise to Curbmate's customers. We look forward to serving you and the curbing industry for another 30 years.